You can fly into Daytona Beach International Airport (IATA: DAB) which is conveniently located adjacent to the Daytona Speedway and is served by Delta Air Lines , US Airways , and Vintage Props and Jets. Other airports nearby are Orlando International (MCO) or Jacksonville International (JAX), both of which are approximately an hour away.
Orlando-Sanford International Airport (IATA: SFB) is located about 30 miles west of the city in Sanford. Several flights from the United Kingdom, including those from Belfast in Northern Ireland, land here. If you are flying Allegiant Air from within the US or Icelandair from Iceland, you will land at Sanford Airport.

Daytona Beach is easily accessible by interstate I-95 which runs north and south and I-4 (east-west) which connects Daytona Beach with Orlando and Tampa. U.S. Highway 1 (north-south) (Ridgewood Avenue) also passes through Daytona Beach. A1A (north-south) is a scenic route along the beach locals typically refer to this route by saying â€œon beachside.

Daytona Beach is served by Greyhound Bus Lines, which has a terminal located at 138 South Ridgewood Avenue (US-1). The Greyhound routes from Daytona Beach connect with hubs in Jacksonville and Orlando.

Amtrak offers the Amtrak Auto Train service with its southern Terminus located in Sanford (Florida), about 35 miles west of Daytona Beach. The Amtrak Auto Train carries passengers and automobiles between Sanford and Lorton, Virginia, effectively serving as a car-rail link from Florida to the Washington, D.C. Metro Area. You can easily drive your car into Daytona after departing from the Auto Train.

Amtrak offers regular passenger service with the closest stop being near the city of DeLand. This stop is rather remote and is not recommended as an option.

Daytona Beach is not a major port, however, it is accessible by private boats via the Intracoastal Waterway, from both the Halifax River and the Atlantic Ocean. Refueling services are available at the Daytona Marina. 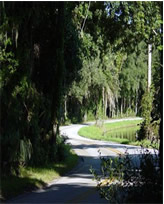 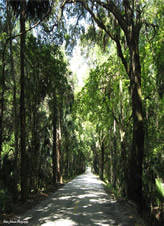